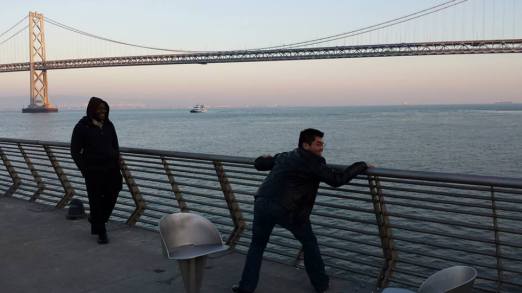 showing my asian booty by the bay bridge

If I’m cute, then why need to add a qualifying clause. Why the need for a justification!? I’m flattered, but what about all the other Asian boys? Dose she (and others who utter this phrase) think that the majority of Asian males are ugly, or weird-looking, or perhaps strange anime characters who belongs in J-pop bands?

Other statements like, “You’re not that smart for an Asian,” or, “You probably know some form of martial arts,” also resonates with me. Despite the last statement being pretty badass (cuz we AZN kick ass), it seems clear that there are plenty of stereotypes (positive and negative) thrown at my face constantly.

In fact, recently I’ve learned that these kinds of statements that includes an Asian qualifying clause, is a form of microaggression. Hell, I wrote a whole blog post about it a month ago.

It’s sometimes difficult determining which form of microaggression to praise and which to reject in an angry-minority-blogger-kind-way. Sure I’ll gladly accept the fact that you think I’m cute, but I will revile this common unholy standard of attractiveness for Asians and this belief  of a small penis!!! (>.<) !!!

So how do we determine what is OK to say and if the person who spoke the offense, if any, is at fault?

My buddy, Daniel, 25, of San Francisco, says, “Sometimes the person who committed the microaggression may not be aware of it, and yet it happens all the time when people use generalization based on race, gender, or use stereotypes.”

This is all confusing, I’m sure. I, too, am also at fault for spewing negative racial, sexual, cultural and many other -als out there. Especially during a heated game of HALO! But I don’t think I’m a racist; I think I’m just a jackass in the nicest way possible. This does not stop me from using microaggressive Asian stereotypes as jokes or joke about other racial (or any other class of people) stereotypes.

Can an Asian make racial jokes about Asians? I’m sure I can; I’m Asian.

The Mexican is strong in my friends cooking

Here is an example of me exercising my microaggressive urges. A friend of mine, Martin, 28, a college educated man of San Francisco, made carne asada fries and I comment: “The Mexican is strong in you.” Did my comment imply that my friend is now a better Mexican because he can make these south of the boarder fries . . . hell yea. I won’t shy away from calling my statement a little racist. Like how I would post on my black friends Facebook wall, “Happy Martin Luther Kings Day.”

Martin returned the joke by saying, “My parents would be proud, Airec Syprasert.” Our banter is one that implies that he is a better “Mexican” because of his skill to cook a dish with a Latin flavor, instead of his career. This is the kind of relationships that me and many other people in the world have with their friends. We share a racially open alliance where one could use racial stereotypes to aid or hurt one another, all for a good laugh . . . or a stinging burn!

Comedians like Dave Chappelle and Kevin Shea also uses racial stereotypes in their jokes, but the general public views them as comics rather than racists.

Was it racist when Shea says, in the video, that black people have white people to “worry” about, or that the last Asian man on Earth would be chasing his dog for dinner? Yeah. But it’s funny! The comedy of truth. Even today the internet is popping up with numerous of blogs and vblogs ranting about how white people are oppressing blacks in America.

In the name of microaggression, the blanket word that shines an ugly racial light onto everything American, it does seem like everything is a tad-bit-sometimes-always-a-baby-racist. But if everything is racist, then that’s bad right? If everything racist is bad, then why do comedians make racially profound jokes/commentary, or why do best friends throw offensive hay-makers and maybe an occasional n/c-word or two?

My Jewish friend, lets call him J-Friend, 24, graduate student at USF, believes that the people who uses the term microaggression are hyper politically correct people, claiming that everything is racist.

“Microaggression is one of those terms I can’t help but roll my eyes when I hear it,” he says. “I’m more callous than others but I think racist jokes, and even antisemitic jokes, are hilarious.”

So now with this new generation of “minorities,” we are faced with this racial line that divides actual racism and comedy.

Also, if someone refuses to see comedy in microaggression, then does that mean that person is a little bit racist? Can a person be so politically correct that subconsciously their mind is being microaggressive?

I will admit that I dislike some of the white SJW at SFSU. I understand that some Caucasians have “white guilt,” but you don’t have to be the forerunner for every minorities battle. This eagerness to jump to a minority defense is what caused some whites to be accused of “march-jacking” the police brutality protest in the Bay Area.

“I think racism just is the negative stuff that no one actually inherits or passes down or is proud about, while the positive stuff being cultural tradition type stuff that people are proud about and want to pass on,” Broscobar says, 25, graduate of UC Berkeley. “Jokes are a different matter though. Sincerity goes out the window and it’s all entertainment. Laughing at a racist joke is the goal because it exists in a vacuum; it’s not supposed to be passed on and no one is supposed to want to pass on or inherit the negative stuff.”

Intent seems to be the key factor when it comes to microaggression, everyday human interactions and comedy. When it comes down to it, it’s really hard to say what is right and wrong when friends are throwing blows at each other or when race, and other nouns of oppression, is used as a comedic trope. Race is a touchy subject and will continue to be one as long as there are ignorant people in the world.

However, this and the blanket term “microaggression” shouldn’t hold you back from making a joke, as long if it’s without malice intent (that word again). Comedy is just tragedy plus time right? So is it ok to laugh now? I also don’t think that my friends who says that Asians have small penises are all racist (I’m average when I’m not drunk, fyi), nor do I think they harbor secret racist feelings. They are idiots, but I guess they’re my idoits? Unless you’re like this Asian girls ex-boyfriend, then you’re just a f*cking racist and gets NO pass! So lighten up, throw some microaggression around . . . an intelligent person should be able to determine what is harmful or not: respect each other out there. Don’t be a jackass.

-Till next time, Sype.

-ps, I do think there is still racism out there, I’m just talking about a little bit of diet racism.

This site uses Akismet to reduce spam. Learn how your comment data is processed.