Instead of me calling it “internet racism,” lets ground this phenomenon in the scholarly world. First coined by Harvard professor Chester M. Pierce in 1970, psychiatrists have described these light “insults and dismissals” as microaggression.

Derald Wing Sue, psychologist and professor at Columbia, defines microaggression as “brief, everyday exchanges that send degrading messages to certain individuals because of their group” that occurs subconsciously when no harm is intended, unaware of the unintentional offense.

For example if I said that all Asians can’t drive, or all Mexicans are illegal immigrants, or all Middle Eastern are terrorist, or all black people can rap, or all Jewish people are cheap, or . . . maybe I’ll stop there . . . then it’s a form of microaggression. I think.

Since openly expressing your hate for another racial group, like lynching black people or sending Japanese people into not-so-fun-summer-camps, isn’t the cool thing to do anymore (because we all know how uncool it is to be judgmental and exclusive right bros ‘n hipsters), diet racism seems to be the new trendy form of hate. Especially on the internet. #newhatenowtrending

Sue also states that microaggression appears in four forms: microassault, microinsult, microinvalidation, and microrape. But if you want to explore more of her work or what all of those four micros mean then you can hit up the Wikipedia link provided above like I did. Especially microrape, it’s just as bad as it sounds.

Being a millennial, we have all been exposed to a misguided judgment powered by microaggression, either online or in real life.

One time my brothers and I tried going to a party on the North side in Visalia. Little did we know, it was a Norteños party (gangsters who bang red). The (Mexican) door guy told us that no Gooks were allowed. At that moment, we didn’t know why this guy was being a fucking racist. Then he proceeded to say that if we don’t bang then it’s ok and welcomed us to come in.

Being obviously dumbfounded by his second clause, we asked him to explain what a gook was to him. His definition of a gook was an Asian gang-banger . . . if he or his fellow gang-brothers had seen the movie Full Metal Jacket or took a simple high school history class, he probably would know that being a gook isn’t a simple street banger and that Charlies were also in the trees and not chocolate factories. So instead of embracing his lukewarm idiotic welcome, we decided to get the fuck out of there.

Now I know that not all of us have had access to a gang kind of experience, I know we have all seen this ignorance in the comment sections on YouTube or on Facebook.

While doing research for one of my blog post on A Dark Minded Giggle, I came across some over-generalizations of the African-American culture in the comment section of this YouTube video:

Long story short, LTG defeated Viscant (20-4) in a game of SF4, or as the gaming community we call it: a raping (yeah, we nerds can have a harsh choice of words).

LTG is African-American who presents a “thug” style. Or urban. I don’t really know what to call it. But in the YouTube comments, Uzumaki Naruto provides an explanation on why “ghetto blacks” are how they are.

Now is he trying to be a racist? I don’t know. I’m not a ninja like he is. He does not state that he dislikes African-Americans but offers his own scientific-sociological explanation on why “black communities” are “like that in the first place.”

He may not have malice intent, but you gotta admit that his view of African-American upbringing is pretty fucking racist.

Now let us look at some stuff online that isn’t as harsh as Naruto comments and a little bit more of a diet racism.

BuzzFeed has some examples (like my Azn brotha down there) of racial microaggression in their post “21 Racial Microaggression You Hear on a Daily Basis,” by Heben Nigatu:

Yeah, I’ve heard that one before too brotha

Or this BuzzFeed post by Tayna Chen, “21 Questions Asian Americans Are Sick of Answering”

Those two BuzzFeed link shows us some examples of lighthearted stereotypes, if lighthearted racism is a thing. However, BuzzFeed has also been an unintended platform of ugly unfiltered thoughts of microaggression towards Asian Americans as well.

On January 6th, BuzzFeed requested their Facebook followers to ask questions that a civilized person might have for Asian Americans in a new segment called Ask an Asian . . . you must be an idiot or super oblivious if you didn’t know what was coming . . .

I first caught this story from the blog Angry Asian Man after my friends kept posting it to my wall. Basically, along with a some questions people had about Asian culture, there were just some racist ignorant questions. 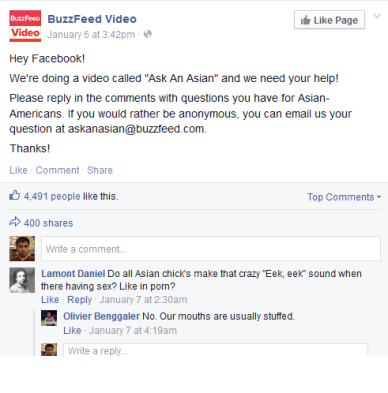 oh yeah, what do you think was gonna happen 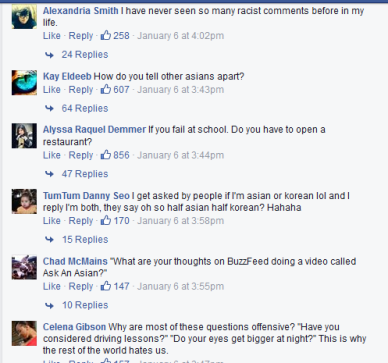 here are some that made the cut

It looks like either BuzzFeed deleted some of the comments or they’re somewhere in the “see more” section. If you visit the Angry Asian Man link that I provided above, you can see his compilation of racist questions.

To be fair, my friends are dicks. But they’re my dicks. In a non-homo way. Not that there is anything wrong with being gay. Dammit I “microaggression” again.

But seriously? why all this online hostility against Asian Americans. Is it because Asian Americans are viewed as the “model-minority” and we’re suppose to just bend over and take it? Why does no one outside the Asian American race jump to the gun and defend our honor as often as oppose to say an African-American? I want my Social Justice Warrior white knight too! Or in this case Social Justice Samurai! Preferably female and hot like in the movies.

No wonder the Huffington Post reported that Asian Americans are the most bullied.

A friend of mine said the reason why it’s easy to ask such negative questions about Asian Americans is because we are “succeeding” in America. And the reason why this PC America takes more offense to other ethnic misconceptions is because they’re still facing a tough struggle. There could be some truth to that belief, I guess. I didn’t know that Asian Americans won the Minorities War and a seat at the WeMadeIt Table. Yay us! We’re no longer oppressed and now everyone thinks we have big dicks!!!

But we have fallen off track here with my PRO-ASIAN-AMERICAN rant. Let us return to the topic of defining microaggression.

So microaggression is this term that we use in post-racial-politically-correct America to define something (a statement, piece of art, whatever) that does not intend harm but has an underlining oppressive tone . . . yeah, that kind of makes sense. And on the internet, there are a lot of stupid people being racist, sexist, homophobic, and all the other kinds of -ist. But you know what they say: there are no stupid questions, just stupid people.

But wait? If we use the term microaggression to explain something that someone might get butthurt over, then wouldn’t that mean that everything is racist? Like comedy or TV shows? Or your old aunt and uncle who immigrated from a different country who doesn’t know better? Iono, that’s a touchy subject here. But I’ll save this conversation for next time when I explore microaggression even more and question whether there is any validity to the term and debate if everyone’s a racist or if this is just a Social Justice Warrior term that lets everyone know that there is a stick up their ass. Hmm, that last part is kinda of mean.

Till next time, Airec Sype.

This site uses Akismet to reduce spam. Learn how your comment data is processed.